When does a motorist have to give way to a cyclist? And when is a cyclist obligated to give way?

What should be done at a crossroads?

A cyclist is a driver of a vehicle. If a cyclist rides on the road, the same rules apply to them as to other drivers on the road. For example, at an equal intersection, you must give way to those coming from the right.

Drivers must give way to cyclists when

Cyclists must give way to drivers/carriageway traffic when:

A transition period of two years for marking toucan crossings in accordance with the new law means that the road markings are not up to date for a while. Instead of road markings, attention should be focused on traffic signs and the traffic situation as a whole.

During the transition period, there may be situations in which a toucan crossing is marked with road painting, but there is no traffic sign at a crossroads indicating obligation to give way. This means that caution and proactive driving are needed especially at crossroads. You must also monitor mirrors and turn your head to check the blind spot. Operators of both four-wheeled and two-wheeled vehicles should approach the crossroads at a speed appropriate for the situation, so that other users of the road can make the necessary observations.

If the obligation to give way is not indicated by traffic signs, giving way is determined according to the traffic rule: a cyclist entering the carriageway from a bicycle path must give way to vehicles coming from the right and the left. However, you should note that turning vehicles must always give way to pedestrians, cyclists and moped riders who are crossing the street that the vehicle is turning onto.

The Road Traffic Act also confirms the right of cyclists to ride the bicycle across a road along a zebra crossing. You may cross the carriageway by riding along the zebra crossing, but the obligation to give way is determined by the rules and traffic signs described here. If a cyclist walks their bike, they are a pedestrian. Drivers must give unobstructed passage to pedestrians who are on a zebra crossing or preparing to step onto one. 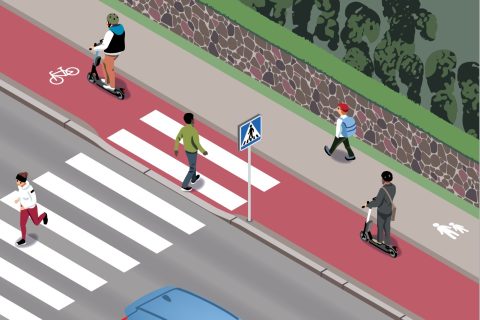