There are many different types of electric personal transportation devices. The traffic regulations to follow depend on the features of the device. For example, the same traffic and the rules on giving way apply to cyclists and those riding an electric scooter.

Taking others into account is essential both when using a device for mobility and when parking it. So do not leave a scooter on a lane where people may trip on it or collide with it.

Thanks to the assistance, an electric bicycle is lighter to pedal than a normal bicycle, but riding an electric bicycle is also exercise. The light pedalling makes an electric bicycle an excellent tool for slightly longer journeys to the workplace, school or shops. Electric power also facilitates pedalling against the wind and uphill. Depending on the model, the operating radius of the batteries requires charging every 30 to 70 kilometres. After this, the cyclist is in charge of increasing the speed.

E-bicycling is an excellent way to exercise reasonably intensely. For example, commuting is possible without excessive sweating. E-bicycling improves the mobility potential for users of different ages, improves traffic flow and reduces emissions.

A self-balancing light electric vehicle which remains in balance even when the vehicle is not moving or has no driver may also be driven on the pavement. In such cases, the driver must provide unobstructed access to pedestrians.

Light electric vehicles must be equipped with a headlight and a red rear reflector and an audible warning device.

The use of the equipment does not require a driving licence, registration or inspection. In addition to bicycles, the provisions on drink-driving also cover motorised bicycles and light electric vehicles.

Assistive walking devices or mobility devices are used on pedestrian routes according to traffic regulations for pedestrians.

Assistive walking devices refer to devices such as balanced people movers with one or several wheels, such as 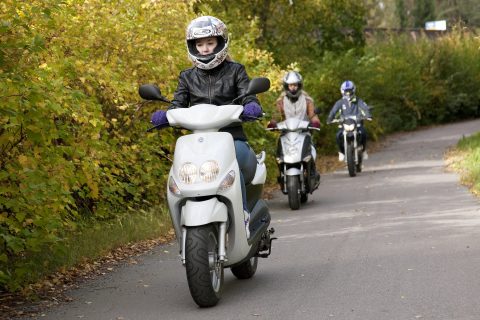